The history of Wing Chun is not recorded in writing before our generation. It is only past down to us verbally. That's why there are two versions of the history of Wing Chun. The only difference between these two versions is the founder of Wing Chun, Ng Mui. The version that was passed down to us through Late Grand Master Yip Man. He stated that Ng Mui was a nun. The version through the research of our new generation believed that Ng Mui was a Monk. It was believed that the old time monks and nuns couldn't work and stay in the same temple. Below is the original history passed down to the Late Grand Master Yip Man.

Ng Mui is generally credited as the founder of Wing Chun. Ng Mui was one of the five elders of the Sil Lum temple but she wasn't always a nun. Her father was one of the eight generals that helped Yeung Jung Wang to ascend to the throne. Yeung Jung Wang was the first emperor of the Ching Dynasty. After he became emperor, Yeung Jung Wang had his own father and his eight generals killed. This was to reduce the threat to his own power. Ng Mui was known as Loi Sai Leung at the time. To avenge her father's death, she killed the emperor and went into hiding at the Sil Lum Temple where she took the name of Ng Mui.

Already an accomplished martial artist, Ng Mui became the number one skilled elder at the temple. She had studied at the Mo Dong Mountain under si-fu Wan Ho Lo Yan. And advanced her martial art skill with Dook Bay Sunn Lai. The other elders at the temple, in order of rank, were Gee Sip, Fong Do Duk, Bak Mei and Miao Hin. Only Gee Sin was a Sil Lum monk. Ng Mui, disguising herself as a Sil Lum nun, was actually a Taoist practitioner. At the temple, Ng Mui developed a style of martial arts, after observing a mouse walking, called Siu Bo Mui Fa Kuen (Little Mouse Foot Work, Plum Flower Fist).. After further research, development, and the observing of a snake and crane, Ng Mui improved the style which became known as Sei Ho Bak Bo (Snake and Crane Eight Step). She then refined the style further and it became known as Ng Bo Mui Fa Kuen (Plum Flower Fist). These three styles are the predecessors of Wing Chun.

During the reign of the Ming Dynasty (1368-1644), gung-fu was practiced in the Siu Lum (Shao Lin) monastery in southern China primarily as a form of physical exercise. With the usurpation by the Manchurians and the establishment of the Ching Dynasty, however, many Ming patriots sought protection in the temple where their lives were not endangered and where some of the people were sympathetic to their cause. Meanwhile, they readied themselves for the day when they would attempt to overthrow the ruling government. It was during this period of time that gung-fu reached its peak in China. Quite ironically, when almost everything was prepared to launch their strike, the Mings were betrayed by an insider. Consequently, the Ching emperor feared a revolution was astir, and his soldiers attacked and burned the monastery. Only a handful of people and the five elders escaped the burning temple.Ng Mui, a Siu Lum master, began to teach the arts to laymen. These disciples were obliged to conceal their activities because the Ching government had dispatched numerous martial arts experts to exterminate them. Ng Mui realized that she would have to save the Siu Lum fighting arts from the emperor's efforts to erase all traces of their existence. Thus, she devised a new, modified system of fighting based on her knowledge of what she had mastered in the temple. In essence, the style utilized techniques of efficiency of motion and direct line attacks and could be perfected in a short period of time.

Ng Mui's best student, a beautiful young girl named Yim Wing Chun, lived with her father, Yim Sam Soak, in a small village where they earned their livelihood by making and selling bean cakes.Yim Wing Chun's popularity in the area and news of her beauty attracted the attention of a malevolent landlord named Wong. Although such matters were often customarily prearranged between two families before the birth of the children, and Yim Wing Chun was already promised to Leung Bok Chau, Wong decided he would marry her anyway. Upon presenting himself to ask for her hand in marriage, Wong was flatly rejected by both Yim Wing Chun and her father, so he plotted to take her by force. In a short period of time Ng Mui was able to teach Yim Wing Chun to defend herself. When Wong returned with his men, a confrontation ensued during which Wong was seriously injured by Yim Wing Chun

Yim Wing Chun continued to study under Ng Mui, and later married Leung Bok Chau. During the years to come, she used the principles of the style that she had learned from Ng Mui and commenced to improve and simplify the art. After refining the art significantly, Yim Wing Chun began to teach it to her husband. Leung Bok Chau was already rather adept in other styles of the martial arts. Impressed by Yim Wing Chun's knowledge and ability, he studied her style diligently and learned it quickly. Thus, although Ng Mui founded the art, it bears Yim Wing Chun's name owing to her improvements.

Boat, the Chinese Opera. He was an oarsman for the Boat and did other labors. He was very muscular. Throughout the generations from Leung Bok Chau to Wong Wah Bo, the Wing Chun system was getting harder and tighter. Leung Ye Tai was also a Chinese Opera member. Leung Ye Tai was a male actor who played female roles in the Opera. His Wing Chun was softer. It is also during the so-called "Red Boat Years" that weapons came into the system. Wong Wah Bo taught Leung Ye Tai the Lok Dim Bun Guan (the six-and-a-half point pole), and Leung Ye Tai taught the Bak Jaam Do (the butterfly knives) to Wong Wah Bo. Leung Jon was an herbal doctor. He was taught by both Wong Wah Bo and Leung Ye Tai. Leung Jon was able to put the hard and soft elements back together. Leung Jon's pupil, Chan Wa Soon, was unable to incorporate the soft elements and made the system hard again.

Chan Wa Soon was Yip Man's first teacher. Unfortunately Chan Wa Soon died at a young age and Yip Man did not finish his instruction. As a young man, Yip Man studied English at the St. Steven's Catholic School in Hong Kong. It was during this time that Yip Man met Leung Bik who was the son of Leung Jon. Yip Man challenged Leung Bik and was beaten. When Yip Man found out who Leung Bik was, Yip Man asked to become one of Leung Bik's students. Leung Bik, being a small man, did not use muscles. His style was not as hard as that of Chan Wa Soon. Yip Man was able to learn both the hard and soft elements. (Another story from this time tells how Leung Bik's daughter-in-law was able to defeat Yip Man with her skill in Wing Chun kicking. From that time Yip Man never said he was number one in Wing Chun as long as the others were alive.) 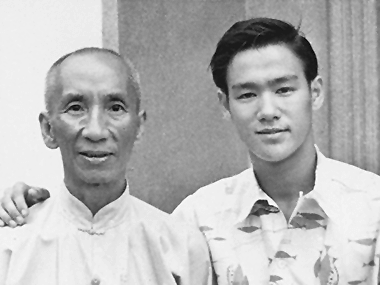 After Yip Man's schooling in Hong Kong, he went back to China, his home town, worked as a policeman and trained cops in China. While working as a policeman, Yip Man killed someone in the line of duty. Fearing reprisals from the Communist government, he had to escape China and lost all his possessions. When he got to Hong Kong he only had his skills in Wing Chun with which to make a living.

In Hong Kong Yip Man met his old time best friend Chung Choui (Go Dai Chung). Go Dai Chung was a Hung Sang Choy Lay Fut teacher and taught through the Chinese Restaurant Association-East and West. Teaching at both locales was too much for Go Dai Chung and he gave one to Yip Man which is located at Dai Lum Gai in Kowloon, Hong Kong so he could teach Wing Chun to make his living.

Leung Sheung was a bookkeeper for the Chinese Restaurant Association and an assistant teacher to Go Dai Chung. Leung Sheung challenged Yip Man and was defeated. Leung Sheung thereupon became Yip Man's first student. Other early students included Lau Ming, Lau Kau and Lee Yu. Yip Man is known as the person who brought Wing Chun out of China and into Hong Kong, however, there were certain types of students that Yip Man would not teach. Yip Man felt that relatives would not show him the respect that he deserved. Even though Wing Chun was developed by two women, Yip Man felt that having women in a gung-fu school would be too disruptive. Yip Man did not want the art to be taught to non-Chinese. He felt that children would not have the discipline to learn Wing Chun. Poor people, he felt, had to work too hard to earn a living and would be too tired to practice.

Yip Man's students can be divided into three "generations". The first generation was taught how to use Wing Chun for fighting. During this time Yip Man was seeking to establish the name of Wing Chun and to increase its renown. The art was not emphasized.

Once the name of Wing Chun was established, Yip Man was able to focus on teaching the art of Wing Chun. This is the second generation.

The last or third generation of students never touched hands with Yip Man. Even though they were members of Yip Man's school, he was no longer teaching directly. Only the si-hings taught their younger brothers.

Although Yip Man would talk to his "grandsons"(the students of the students), he did not consider them as his students and would not teach them nor work with them. Yip Man being a traditional gung-fu man, always kept the separate positions clear.

Ho Kam Ming was of the second generation of Yip Man's students. He spent all his life to study Wing Chun and was one of the few men to complete the entire system under Yip Man. Ho Kam Ming was held in high regard by Yip Man. When Yip Man became ill and had to go to the hospital, he asked Ho Kam Ming to take him there. Ho Kam Ming often visited Yip Man in the hospital and took care of him in both the hospital and at home. Yip Man revealed many of the finer points of Wing Chun to Ho Kam Ming. Yip Man also appointed Ho Kam Ming to assume the responsibility of instructing his private students. By this time, Ho Kam Ming had already opened his first school in Macao and another in Hong Kong. He also organized the Ho Kam Ming Wing Chun Association which is authorized by the Yip Man Wing Chun Association. Today, Ho Kam Ming is well known in both Hong Kong and Macao. His full contact Wing Chun team has fought in martial arts tournaments throughout Southeast Asia and has achieved considerable recognition.